Advancements in our Communication Technology Drives New Ways to Work

Advancements in our Communication Technology Drives New Ways to Work

In 1969, Economist Frank Schiff wrote an article for the Washington Post titled “Working from Home can Save Gas.”

Motivated at the time by petrol (gasoline) shortages, environmental concerns, and the “mental and physical stress” of long commutes, he suggests that companies should consider policies allowing employees to work from home one to two days a week – a move made possible by what he refers to as the development of modern “machinery,” citing hand-held calculators and portable computer terminals connected through telephone lines as examples. Schiff predicted an acceleration of communication technology advances in the coming years that would further support an at home workforce.  At the time, the “Internet” was a little-known experimental communication technology system developed by the U.S. Defense Department and accessible to only a handful of technological and academic elites. Still, Schiff predicted “A growing number of homes is likely to become equipped with machines that combine the functions of television sets, videophones, computer terminals, electronic files and word and data processing systems and that can be directly connected with offices and other homes.”

Frank Schiff was clearly a visionary. Even so, it would take several more decades of advances to prove him right.

Our Communication Technology Tools: a coming of age story

If a 2020 global pandemic had to force millions of office employees into their homes, it’s instructive to imagine what this would have been like had it happened even 15 years earlier. While the 1983 universal adoption of the Transfer Control Protocol/Interwork Protocol (TCP/IP) transformed the emerging new communications system into one that could be accessed and used by the everyday consumer, its applications were limited. In 2005, fewer than 30% of Americans had broadband Internet access in their homes. At that time, the average download speed for home Internet was 5 megabits per second compared with today’s average 150Mbps, and half of the Internet-connected households were still relying on dial-up modems over phone lines for access. Skype existed, but only as a voice call service – there was no such thing as general access to video conferencing.

Today’s modern cable and fiber-optic 4G (soon to be 5G) wireless services now support a worldwide network of multi-modal, Internet-connected mobile and desktop devices that has transformed traditional, narrow communication channels into superhighways of anywhere, anytime shared digital information. Email, instant messaging, video chat and feature-rich collaboration solutions have found a solid foothold in the enterprise IT infrastructure as well as the consumer market and, in the process, have all but erased the dependence on a centralized workspace for effective business operations. 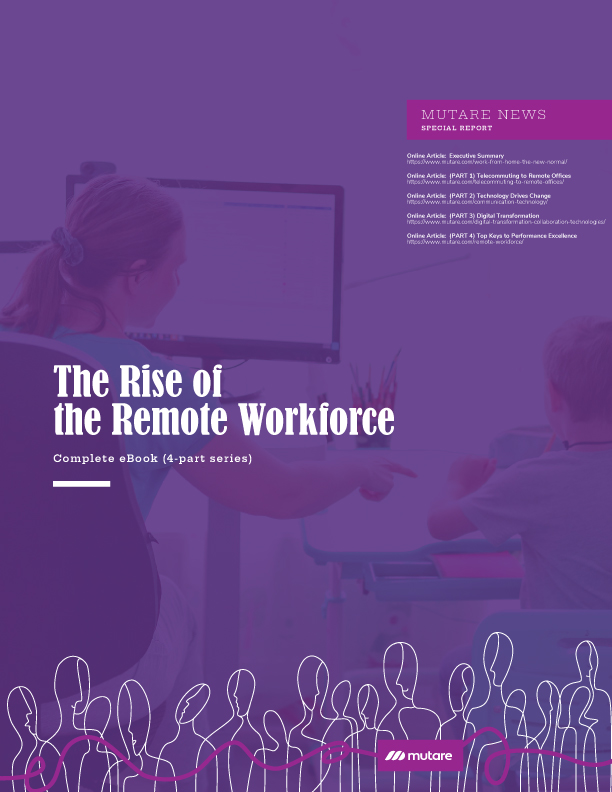 Of all the modern “tools” Frank Schiff envisioned, the one he failed to conjure, the one that arguably has had the greatest impact on modern day communications, is the cell phone. Developed in tandem with Internet technology and support systems, cellular communication capabilities provided the final bridge to true anytime, anywhere connectivity and the unleashing of limitless unified messaging potential.

In 1973, Four years after Schiff wrote his prophetic article, Motorola unveiled the first working prototype of a portable mobile phone, based on the use of radio frequencies and a limited collection of cellular transmission centers. It was the size of a large brick, weighed 2.4 pounds, had a talk time limited to 30 minutes and recharge time of more than 10 hours. While impractical for general use, it ignited a worldwide drive for better mobile communication technology that would serve an increasingly decentralized workforce.

The real challenge, however, was not so much with development of better devices, but rather with the creation of a wide-ranging cellular infrastructure and standardized signaling technology needed to connect them. In 1983, the Advanced Mobile Phone System (AMPS) for cellular phone calling was commercially introduced in North America, ushering in a new era of mobile communications and driving mass market adoption. There were serious vulnerabilities, however, particularly for business users. The analogue signal was unencrypted and subject to invasive “eavesdropping.” And the large bandwidth demands of analogue signaling impacted both battery life and connection reliability for the new mobile devices.

A second-generation cellular system emerged in the early 1990s that was built on more efficient, reliable and secure digital technology that overcame the large shortcomings of its analogue predecessor while delivering better voice quality. Smaller, more powerful batteries and advances in micro-electronics increased usability and portability of these devices. But it wasn’t until 2003, with the worldwide adoption of 3G network standards, that hand-held devices were able to harness the bandwidth needed not only for voice calls but also data transmission and media content access. For the first time, users worldwide could make phone calls, share emails, send text messages and access Internet content from a single device, launching a mobile communication revolution that is still unfolding today.

Do you remember BYOD?

By 2009, 85% of American adults owned mobile devices that they could easily carry with them to use throughout the day, including within their work environments. Most companies at the time required business transactions to be conducted through company-issued devices only, with Blackberry, Nokia and Motorola dominating the enterprise mobile communications market. But a new force was already underway. Two years prior, in 2007, Apple had launched the first iPhone with its revolutionary touch display and intuitive “smart” features for simplified web browsing, email, maps and texting. As adoption skyrocketed, consumers soon recognized the superior ease and convenience of this new generation of smart phone compared to legacy devices.

With growing pressure from its own workers, semi-conductor chip manufacturer Intel broke rank with peer organizations and openly encouraged employees to use their own personal devices in the workplace – a practice which came to be known as Bring Your Own Device (BYOD). Now untethered from their office workstations and empowered with anytime/anywhere access to business communication networks using the devices of their choice, Intel employees reported saving nearly 1 hour a day due to improved workflow and productivity.

It did not take long for other large organizations to follow suit, recognizing not only the employee productivity gains but also the savings that could be realized when shifting a portion of communication device and usage costs onto the employee. Today, 95% of organizations allow personal device use in the workplace, while 87% of companies say they are dependent to some extent on their employees’ ability to access mobile business apps from their personal smartphones. BYOD is so ubiquitous that it is hardly a relevant term today.

For all the benefits for both employee and employer, unleashing a growing and diverse collection of network-connected smartphones, tablets, and wearables into the corporate domain has brought with it a new set of challenges for corporate IT departments, including the broader exposure to potential security breaches, increased complexity of device management and support, and ownership/management of company data stored on those device.

As suggested by IT Manager Daily contributor Megan Berry, “Bring your own device programs call for three critical components:

1) a software application for managing the devices connecting to the network;

2) a written policy (Acceptable Usage Agreement – AUA) outlining the responsibilities of both the employer and the users;

3) a signed End User License Agreement (EULA) acknowledging that the user has read and understands the policy.”

Unified Endpoint Management (UEM) software, offered through a number of vendors including Microsoft, Citrix, Hexnode and IBM, can be used by IT administrators of BYOD-friendly organizations to track and manage the devices entering and connecting to the IT infrastructure. As an extension of former Enterprise Mobility Management (EMM) tools, UEM applications provide a unified interface that simplifies identification and tracking of connected devices regardless of device type or operating system. They also include various levels of remote access and control. Each company must consider what level of control is needed; for instance, if a device is lost or stolen, the application may provide for a remote lockdown or wipe by the administrator, so company data is not compromised.

To avoid intrusion into an employee’s personal information, organizations should make sure their application restricts the collection of personal emails, contacts, calendar information, call history etc. and that policy is clearly communicated to the employee. Most UEM solutions provide the ability to create an encrypted “container” on the device that separates personal from business data, and only that container is accessible by administrators. Should that device be lost or stolen, only the data in the work container would be wiped. Some applications allow for self-registration by the user, others require registration through the administrator.

Click Here to see a Gartner’s review of the top UEM providers.

Next, creating an Acceptable Usage Agreement (AUA) policy that is clearly communicated to each employee using personal devices for company business is essential and should be customized to the specific environment. These agreements might include specifics pertaining to browser usage, data storage, acceptable apps and security tools, IT support expectations etc. IT Manager Daily provides a template that should help IT management think through the many possible elements that might be included in such an agreement, with the recommendation that a completed AUA be reviewed by legal counsel before instituting.

Either as an extension of the AUA or presented as a separate document is the End User Licensing Agreement (EULA) – a legal document signed by the user acknowledging that they have read, understand, and agree to the terms of the usage agreement.

Clearly, even with the best tools, managing the integration of employee devices into the IT infrastructure internally is a complex task best handled by large organizations that have the required staff and resources. Small to medium sized organizations may consider outsourcing through any number of IT service providers specializing in mobile device management. Solutions Review has published a “Best of 2020” review of top managed mobility service providers.