With the disrupting force of an international pandemic, organizations and employees alike have been forced to reevaluate how to communicate in an altered landscape. As such, the renegotiation of expectations, processes and technological tools have been front and center, as we have been forced to springboard towards a digital-first landscape.

But, as we have sprinted down this new pathway, we have learned interesting things about ourselves and how communication is the lifeblood of our connections, communities and relationships.

Surprisingly, we have grown weary of video calls and online meetings, which were thought to be the answer to sustain connectedness.

But even more interesting is what has made us feel better, and what has been proven to be the most relied upon method of communication when live connections are not possible…the telephone call. 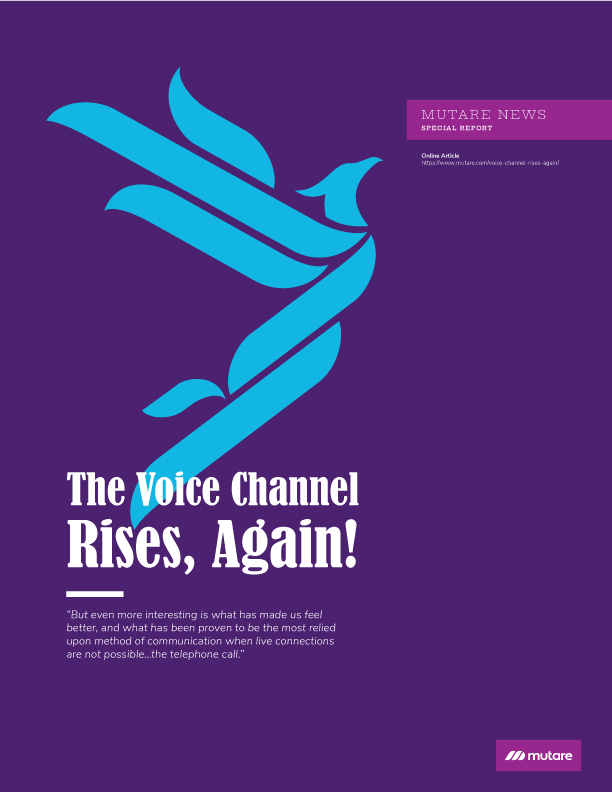 Teams. Zoom. Slack. The adoption of virtual collaboration tools for business purposes has accelerated dramatically over the past year and a half thanks to a certain pandemic and the abrupt exodus of employees from conference rooms to chat rooms. While this adaptation was once assumed short-term as the world awaited a return to “normal,” over time employees have grown used to the lifestyle and flexibility of a remote work model. Most expect it to continue, and are now actively seeking employment opportunities that support work-from-home arrangements.

Employers, too, have realized the benefits of an unexpectedly motivated workforce, a broadened selection of employee candidates unrestricted by location, and reduced office-related overhead.  Armed with the power and mobility of world-wide broadband connectivity, cloud applications and smart devices, today’s employees, untethered from centralized offices, have transformed the very concept of Work from Home to Work from Anywhere. And if that is now the new normal, then resilience is the new necessity for organizations looking to thrive while navigating an unformed path into the future.

An article describing The Digital-Ready Workplace posted by consulting firm, Deloitte, suggests that the modern work environment is actually made of three distinct but overlapping “workplaces”:

As the need for a physical workplace declines, organizations are now pressed to rethink how to maintain productive operations that capitalize on the collaborative capabilities of both personal and shared digital work environments. More importantly, those strategies must be formed around a clear understanding, built on experience gained over the past 18 months, that whatever works today may change tomorrow.

Nowhere is this more evident than in the shifting arena of business communications. The strain of maintaining essential relationships between widely dispersed employees and the customers they serve has prompted a heightened dependance on digital technology.  The rapid adoption of video conferencing as a reasonable substitute for in-person meetings was swift, with well-positioned vendors eagerly promoting the enduring virtues of virtual interaction. As touted in this Zoom document aimed at prospective investors, “Our goal is to make Zoom meetings better than in-person meetings. We provide a video-first communications platform that delivers happiness and fundamentally changes how people interact.”

This lofty claim seemed altogether plausible in light of Zoom’s astronomical growth in the first few months of 2020, from 10 million to 200 million user logins daily. Though a large portion of those statistics include online learners, Zoom’s business customer base more than tripled over that same three-month period.

Yet, as the months wore on, and as it became increasingly evident that in-person business interactions were going to remain restricted for the unforeseen future, something began to change. The novelty and excitement of virtual meetings became a daily grind.  A new phenomenon – dubbed Zoom fatigue, was setting in, and with it came the threat of eroding employee productivity.

In an article for NPR, author Aallavi Goggoi speaks with CEOs of some of the nation’s largest corporations – JP Morgan, American Airlines, and Microsoft, to name a few – who expressed a growing consensus that an all-virtual work model is simply not sustainable.

According to Microsoft CEO Satya Nadella in a virtual conference organized by the Wall Street Journal, “What we as human beings need, want, seek … is human contact.”

Social psychologists are also now  weighing in, citing the mental exhaustion and sense of isolation reported by individuals who are caught in end-to-end video conferences.

Articles touting the wonders of the virtual office have, in recent months, been replaced by those providing tips to combat Zoom fatigue.  “Schedule breaks between meetings; Stop multi-tasking during meetings; Turn off self-view;  Practice the 20/20/20 rule for eyes (for every 20 minutes on the screen, look 20 minutes at something 20 feet away) are just a few of their suggestions.

And yet, none of these address the essential need for one-on-one interactions on a human level  – an assumed element of the physical office space that has been left behind in the Work from Anywhere world.

So, what’s the solution?

As stated in a November 2020 article, Wall Street Journal columnist Krithika Varagur notes, “Zooms and video meetings are too taxing. Emails and Slack hold companies together, but written text can never capture the nuance of human conversation. What’s the answer? The humble phone call.”

The Importance of the Voice Channel

Indeed, the pendulum is swinging back to voice communications (phone calls), with new research pointing to the fact that the phone is actually a more effective instrument of communication vs. video conference, especially when working through complex business issues.

The preference for issue resolution via voice extends to customer relations as well. Now that the percentage of consumers browsing websites from their mobile phones has overtaken activity from the desktop, it’s no surprise that consumer-to-business phone calling from those same devices has seen a corresponding increase. This Google study reveals that a full 61% of mobile users now call a business when they are in the purchase stage of the buying cycle. And, according to a recent study by advertising and marketing advisory firm BIA/Kelsey, calls to businesses are 10 to 15 times more likely to generate a successful sale or follow-up activity compared to digital form submissions. What’s more, consumer to business phone calls influence $1 trillion in U.S. spending at some stage in the path to purchase.

The relevance of this cannot be overstated. Despite all that has changed in the world of business interactions, one fact remains consistent: If a customer calls a company, they mean business. Among the top reasons customers leave a company for a competitor, even more influential than price, is poor responsiveness. Investing in customer experience at all touchpoints is key to business growth.

Both in terms of employee interactions with each other and with customers, companies cannot afford to overlook the voice channel as they build out their omnichannel, Work from Anywhere IT infrastructure and strategy. Arming employees with interconnected communication tools that provide consistency, professionalism and security is paramount, albeit more challenging, in a highly dispersed employee force lacking the clear work/personal life boundaries of a physical office setting.

Supporting and Securing the Voice Channel

It is important to note that support for a remote workforce must take into account new security considerations, particularly bearing in mind that remote workers are likely more tempted to use their readily available smart devices for work exchanges. When it comes to business calling, this opens up a whole new cybersecurity vulnerability. According to a 2020 Ponemon Institute survey of 2,215 IT and IT security personnel titled Cybersecurity in the Remote Work Era, “Sixty-seven percent of respondents say remote workers’ use of their own mobile devices such as tablets and smart phones to access business-critical applications and IT infrastructure has decreased their organizations’ security posture.”

Businesses that do not invest in the tools that make it easy for remote employees to conduct work securely are leaving themselves open to those employees becoming a conduit for cybercriminal activity.

When it comes to important business telephony, Voice Over Internet (VoIP) technology has come a long way, and network architects and security engineers have a wide range of security methods and solutions (hardware and software) to harden and protect this critical technical infrastructure.  But, in the world of cybersecurity, there is never time to rest as the attack surface is ever increasing and growing in nuance and complexity.

In regard to the voice channel, a burgeoning security gap has come into view, voice traffic.  Remember, most organizations have put time, money and focus on protecting the technical infrastructure that comprises their enterprise voice network.  However, very little thought has gone into the calls, or traffic that go through the voice network.  As such, bad actors have set their sights on ways to exploit the voice network by infiltrating voice traffic in a wide array of attacks, including Social Engineering, TDoS, Ransomware, Data Theft… and this is just the beginning.  (for more on securing the voice network, go to:  Hot Tip, Voice Traffic Security!)

Remote Workers have driven demand for advanced features of their enterprise phone system, such as full-featured voicemail – an application that has taken on increased relevance in a multi-tasking work environment and the likelihood of missed “after hours” outreach between employees working across multiple time zones.

One company, Mutare, has seen that opportunity and taken the lead in developing a solution for business voicemail that turns the inevitable missed call into a business asset that actually enhances response.

More than just voicemail, the Mutare Voicemail platform combines the best of both worlds for caller and call recipient. When an organization adds Mutare Voicemail to their voice IT structure, missed calls are converted into context-rich digital notifications that are delivered to any of the call recipient’s preferred devices via email, IM or text message. Users control how and where they want those notifications delivered and can view a summary of all messages with expandable call details and streaming player from their password-protected web portal.

The result – an employee who can quickly see, prioritize, and return important calls at any time from any location, from any device, with the intelligence they need for a more effective response. Callers feel well-served and get the personal voice connection they seek, while employees are no longer wasting time dialing in to listen to spam or other unwanted calls. What’s more, digitalized voice message data is easily saved, shared and searched since it can now be integrated into the organization’s customer data store for future reference, reporting and analysis.

Advancing the value, integrity and efficiency of the voice channel, Mutare has also released a powerful voice traffic filter solution that actually blocks the majority of malicious and unwanted phone calls that are the root cause of institutional fraud, security incidents and data breaches.  In essence, this advancement in enterprise security serves as a firewall for voice traffic, stopping the bad guys while allowing legitimate calls through.

Built to work seamlessly with just about any enterprise communications infrastructure, the Mutare Voicemail Platform and the Mutare Voice Traffic Filter are simple to integrate with Cisco, Avaya, Mitel, Microsoft and other unified communications providers. Both applications are web-based with flexible administrative controls that provide easy adaptation to ever-changing business needs.

Undoubtedly, the covid-19 crisis was a worldwide stress test that challenged the resilience of our social, political, medical, and business communities. Yet, emerging from the fallout are new insights, practices, tools, and attitudes that will reinforce those institutions with the adaptive qualities they will need next time the unexpected happens.

As the workforce becomes increasingly dispersed, virtual conference tools will continue to play a key role in maintaining critical relationships. However, there is no substitute for the simple power of a voice call. Using new, cloud-based technologies to tap into, integrate and elevate voice interactions in a Work from Anywhere world must be part of any organization’s IT strategy.